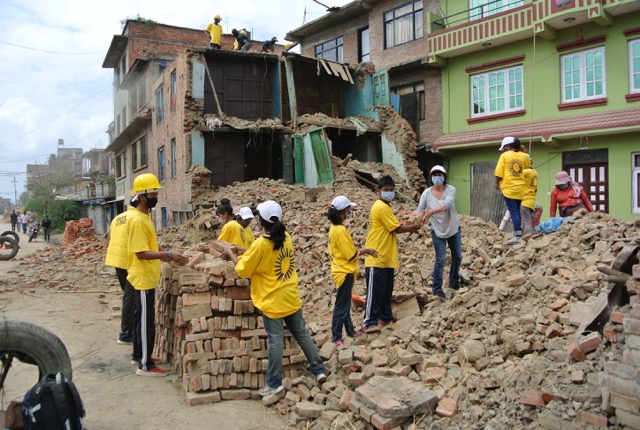 Shortly before noon on April 25th, 2015, the earth shook in Nepal. A massive earthquake measuring 7.8 on the Richter scale brought the region to its knees.

The quake originated 15km below the surface of the earth, and displaced Kathmandu by about 3 meters. The event was almost indescribable.

For those of us who experienced it, it felt like being onboard a madly swinging chair, or on tiny boat in a churning ocean, helpless and afraid. The ground beneath our feet was moving back and forth, vibrating violently. There was an eerie roaring and rumbling of the earth. Houses collapsed in a vast cloud of dust within seconds.

Even the residents of the supposedly “safe” concrete buildings were forced to watch in awe as their homes initially stood still, but then collapsed upon themselves as if they were being demolished by explosives.

Many lost their sense of orientation and were simply staggering back and forth in a stupor. The Nation was in shock. Soon, the entire world heard the news.

The immediate reactions of all of us there were quite similar: “Where should we run to? Can we escape? Where can we hide?” But one simply can’t run off the face of the earth. There was no exit strategy.

Mother Earth has shown us how powerful she is. No matter whether we were young or old, rich or poor; during those moments we were all the same.

On the positive side, I am happy to say that the older kids here at Happy Children acted with exemplary courage.

They helped many other people with a cool head, with bravery and deliberateness. It was our own brave Champa, (who had almost lost her own life as child due to her health problems) who calmed the panicking visitors of a movie theatre.

Our Man Bahadur, was another hero. As a child he suffered from polio, and eventhough he couldn't run due to his disability, he found the inner strength somewhere deep down, and broke down a blocked off fence, helping hundreds of people to escape a certain death. They would otherwise have been buried under the ruble in the narrow streets of the city.

Both of these brave souls have not forgotten their own good fortune. They were both saved by surgery as children, and this was their time to pay back a little good karma.

Tirelessly they worked – all our little heroes. Clearing rubble and rebuilding – pooling their efforts with other teenagers in the home and distributing supplies until they were at the edge of exhaustion.

We knew right away who we had to thank for our good fortune, having only suffered mild injuries.

We carried bags of rice on our shoulders and set off on strenuous journeys – to get to remote areas where no help was available.

We acted fast despite a shortage of food and fresh drinking water, and shared what little we had with many. Many of the employees’ families and village residents took shelter with us under plastic tarps, because nobody wanted to be alone during this time.

We cooked, ate and slept outside. Our fallen walls had us worried about looters and wild animals. The older boys helped us keep watch for nights on end and kept a vigilant eye on the children.

To tell the truth, we were very fortunate at the Happy Children home. Due to our earthquake-proof way of building, and many earthquake-training sessions, we did not lose a single life, nor did we have a big buildings collapse.

Life was demanding for the Nepalese, who are already accustomed to a lot of struggle in their lives. Everyone was long in “earthquake mode”. Every door that got shut a little too loudly, every truck that drove by, every roaring airplane, and even a growling stomach alarmed us all, and we had to bite our lips and control the nerves.

It Took quite some time, and a whole lot of work before all the traces of disaster vanished.

It´s not surprising, because the Himalayas, mother of all mountain ranges simply

could´t come to rest with almost 500 aftershocks within a year.

The second major earthquake shocked everyone, and many people were struggling to regain a sense of normalcy. We had tried comforting ourselves by thinking that the first quake freak of nature. We almost believed that the world was coming to an end after the second.

Whatever was still standing after the first quake in April, collapsed like a house of cards after the second quake.

The after-effects are worst in the remote villages. Many villages have been completely reduced to rubble and razed to the ground. These people were desperately hoping that the rest of the world woudn't forget them.

For this reason we were very determined to get food, tents, blankets, plastic tarps, water filters, toys, medication and basic equipment to the needy.

So far we had equipped a few hundred people with basic needs, to help them past the worst. These people were so devastated, that they honestly feared not being able to survive the aftermath of the earthquake. They had nothing left to eat and were not able to find clean water. Things were so desperate that the living envied the dead, because at least the dead had put the hardships behind them.

Oftentimes, just looking at these desperate people moved us to tears.